You can’t be a horror writer or writer of supernatural things without digging graveyards. We write about dead people or dead things, so the places where those people and things are buried have an attraction in one way or another. I like them for a lot of different reasons, but until yesterday I’d never run through one. 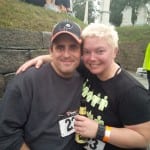 A bunch of friends, my husband, and I ran the RIP 5K in Laurel Hill Cemetery. Laurel Hill is sort of a big deal in Philadelphia. It’s a National Historic Landmark–78 acres of Philly history. Founded in 1836, it was a non-sectarian burial ground, and early in its history most people visiting the cemetery did so via steamboat along the adjacent Schuylkill River. A great number of famous Philadelphians are buried here, including Thomas McKean (a signer of the Declaration of Independence), Richard Vaux (former Philadelphia mayor and U.S. Congressman), and Henry Deringer (of gun fame). The monuments, gravestones, and mausoleums in the graveyard are amazing. Interestingly, you can still be buried there.

It’s also incredibly hilly–hence, the name, I suppose. There are only inclines and declines, no flat, level paths . . . it made the race kind of hard, but the scenery was gorgeous. Especially past the line of mausoleums overlooking the river. I’ve looked at the mausoleums often enough from the river–in six or seven years of competitive dragonboating, I’ve paddled past them a million times. But from the cemetery the river looks more peaceful. Pretty.

I think I was one of the last racers to finish the race yesterday. Granted, there were a few hundred racers, and I started in the back of the pack. The race wasn’t chipped, so whether you started first or last, your start time is marked the same. Now me, I wear a GPS watch, so I know my actual time. For all the hills, I did pretty well. I had my fastest 1K and 1 mile times ever, which made me pretty happy! And after the race, I hung out with my friend’s daughter–a writer in the ninth grade. We wandered around Laurel Hill to look for good character names (see a few photos below).