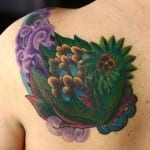 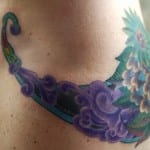 After something like eight hours in the tattoo chair, three different sessions, my tattoo is finally finished! This last time around, I read the first ninety pages or so of The Golden Compass. It seems like the kind of thing I should have read long ago–the last of the books was published in 2000. But as luck would have it, I found a nice set of the His Dark Materials trilogy at a flea market on Saturday morning.

I haven’t really checked out the books yet, but I know that one of the books, The Amber Spyglass, was censored for its US printing. Something about the main character’s sexuality. I remember hearing quite a bit about the first book’s alleged anti-Christian leanings when the movie came out several years ago. The very strange Bill Donohue of The Catholic League made the claim that it was an atheist’s attempt at indoctrinating children. Into what, I don’t know. Atheism, I guess, although being one myself it’s not the kind of thing one lures people–or kids–into. But that’s an argument for another day. So far, I haven’t read anything to turn young minds against religion, Christianity or otherwise. Who knows, maybe the movie is far more nefarious.

I do love a good conspiracy theory.