So there I was this morning, running down the street. My lungs burned. In the distance, a bright yellow fog hung in the air, almost seeming to rise from the macadam. People staggered out of the cloud, coughing and sputtering, skin glowing bright canary.

It sounds like a haz-mat situation, or maybe the beginning of a zombie film. Alas, no. It was the Run or Dye 5K in Philadelphia! 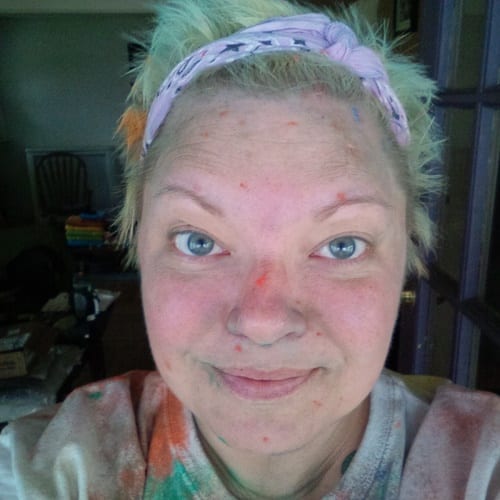 Last year I decided to be a runner. Train for races. Work up to completing a spring triathlon one day when I’m ready. I’m the world’s worst runner. I’m slow. I’m injury-prone. But when you’re writing novels, it helps to have a physical activity to do that makes it possible to get out of your head. So I ran a hand full of 5Ks last year, and this year my husband and I decided to start the season with a fun run–the Run or Dye race.

I’ve long been fascinated by the Indian festival of Holi, and so the Run or Dye festival seemed like a good way to experience it without flying to India (although I’d love to do that one day, too). It’s a huge race. HUGE! The organizers release runners in waves. We were there fairly early, and my wave didn’t start running until thirty minutes after the start. People were still starting the race as we finished and drove off. Crazy! 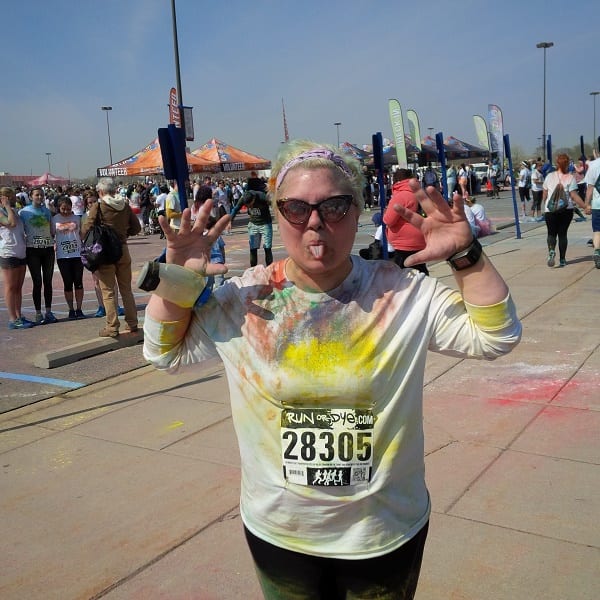 The race isn’t timed, and no one cares if you walk or run. Lots of little kids. A few people in costumes. Lots of people artfully applying dye powder to themselves before taking selfies in the race start corral. The race wound around Citizens Bank Park in Philadelphia and around the parking lot, and in addition to the yellow dye gauntlet, there were four or five others, all with different colors being tossed at runners.

And in case you’re wondering, dye gets EVERYWHERE. In your ears, in your mouth, under your clothes, in your sports bra, in your socks! What you can’t see in these photos is that I must have gotten caught in a direct hit of bright orange dye–the entire back of me, including my hair, was a solid wall of orange. Sexy!

In other words, it’s a fun and easy race to start the season, and a good tension breaker.

And now, I write!

Out of the Haze, It Oozes