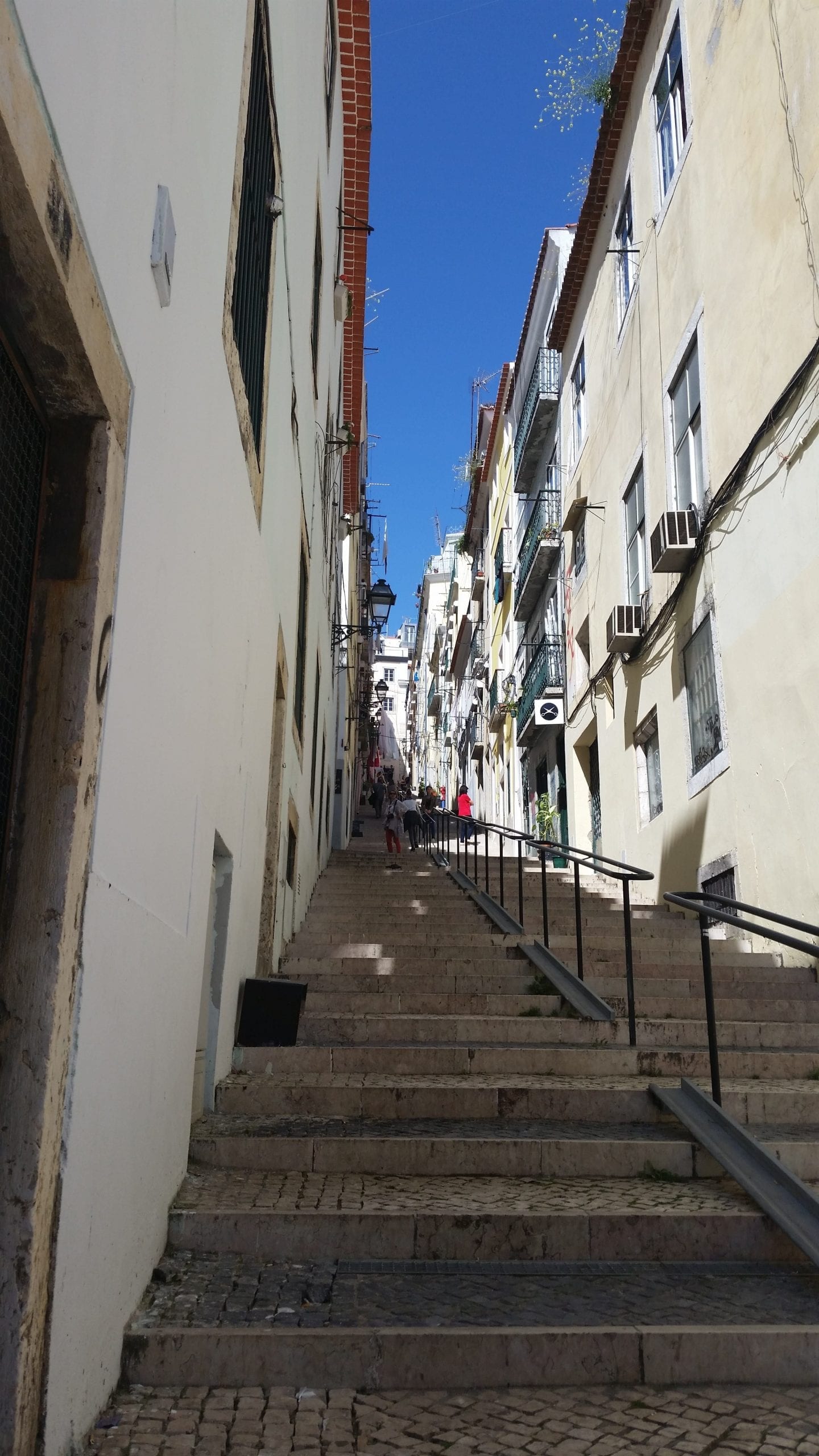 A few days before I left for Lisbon, Portugal, I started wondering whether I should have chosen an alternate location for vacation. I didn’t know much about the culture of Portugal, and I had only learned a small bit of Portuguese. Weirdly, it’s something that happens a lot: right before a vacation, it’s second-guessing time.

As it turns out, it wasn’t language or culture that I had to worry about. Instead I should have been concerned about all the hills. There’s a reason that Lisbon is called the City of Seven Hills, and “hill” is perhaps understating the issue. Everything seems to be at the top of a steep incline, and even going downhill feels like it’s walking uphill.

But I’m getting ahead of myself.

The flight from Philadelphia to Lisbon is six or seven hours long, and my husband and I managed to snag coach seats on the very first flight of the season on my husband’s airline (the Lisbon flight is seasonal). It was a non-rev flyers dream: 50 unsold seats, so we had a whole row to ourselves. The flight had only minimal turbulence and passed quite quickly.

Lisbon is a wonderful city in terms of public transit from the airport. The red line of the metro picks up right at the airport and will get you into town in about thirty minutes or so. We rented an Airbnb apartment in the Barrio Alto neighborhood, so we transferred to the green line at the Alameda station and took the train to the Baixa-Chiado station.

So, here’s where I discovered the sheer horror of Lisbon hills. It’s always a bit difficult to orient yourself in a new city, right? Had I any sense of direction whatsoever, I would have known not to exit the station toward Baixa, or the lower town. But yeah, that’s what we did (instead of taking the three or four escalators up toward Chiado, or the upper town), and it necessitated Craig and I hiking up a million sets of stairs and hills, blindly following the tiny Google Maps arrow on my phone. We finally reached Camões Square in the upper town, and I had to sit down and take a freaking break. I was sweaty and gross and tired and kind of delirious. 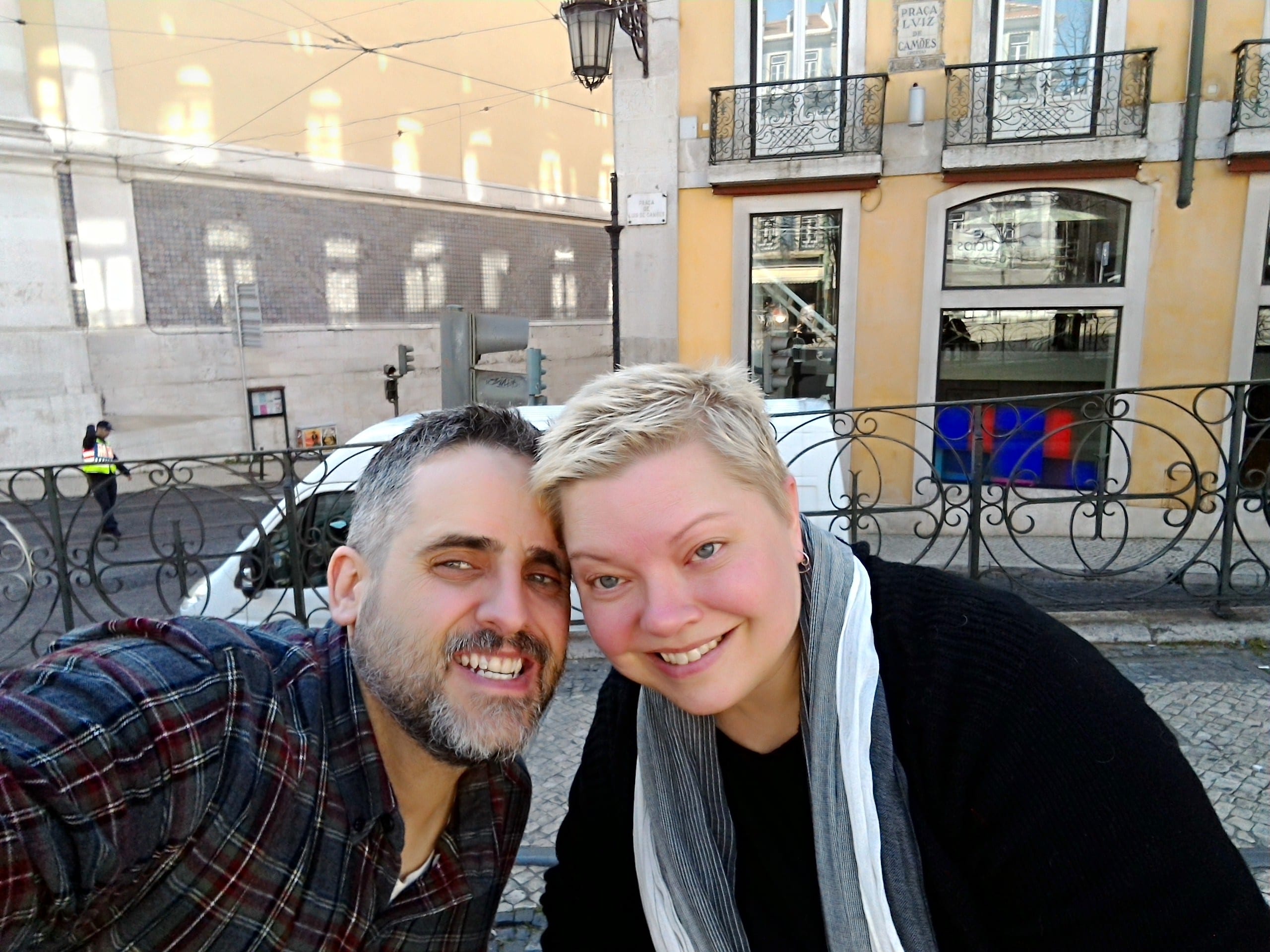 But that wasn’t the end! Oh no. Our apartment was up another two blocks on a very steep road. And then up five flights of stairs.

I considered never leaving the apartment. You can visit Europe and never leave your apartment, right? Right?

That all sounds pretty hideous, and maybe like I hated Lisbon. In truth, I love Lisbon. I loved our apartment, five floor walk-up notwithstanding. I loved the Barrio Alto area, too. I got all sorts of ideas for a new novel. In fact, there was nothing about Lisbon that I disliked, other than I had to leave after five days.

Lisbon is all terra cotta roofs and tiled building faces, cobbled streets and narrow tiled sidewalks, fresh seafood and wine, blue skies and pasteis de nata. There’ll be a few posts about Lisbon coming up, but here are a few tips/suggestions for visiting Lisbon:

We were sad to return to the States after a fantastic five days, but the good news is that we loved it so much we’re sure to return. I’d love to spend some time in Porto and Colares, maybe even spend another day in Sintra.