The Mulder-Scully Soul Group Reimagined and Other Good News

It’s no secret that I’m a massive fan of The X-Files. When the show got an additional two seasons a few years ago I was beside myself with joy. I maintain that “Mulder and Scully Meet the Were-Monster” is the best episode ever, bar none. That said, when I was invited to contribute to a collection of work–Outside In Trusts No One, from ATB Publishing, now available for pre-order–about The X-Files, it wasn’t the episode I chose to write about. No, that would be “The Field Where I Died,” from season 4. It is an incredibly lovely episode that deals with reincarnation but which doesn’t even remotely fit in with the notion that Scully and Mulder are meant to be together, and for that reason it ticked off a lot of people. Well, that and the depiction of a woman with a ton of past lives manifesting as multiple personality disorder. But whatever, I love the episode for a ton of reasons. You’d think my inclusion in the Outside In Trusts No One collection would be a bit of a love letter to the episode. Oh contraire! Rather, I revision the Mulder-Scully soul group and imagine Mulder as a QAnon-adjacent dork–which, let’s face it, is not out of the realm of possibility . . . except that Mulder always demanded at least logic and some semblance of evidence to his conspiracy theories. But still, it was a fun exercise. If you’re an X-Files junky, too, consider pre-ordering. I love reading these series-specific collections from ATB Publishing, because there’s something for everyone, from academic analysis to poems and songs inspired by episodes to random rants about little details. That’s a good time! In other news, a new short story of mine–“Waiting for Winter”–was just acquired for anthology called Shiver, described as a horror anthology for cold weather settings. Look for that anthology in early 2021. You don’t have to wait that long for new work from me, though! My short story “An Older Lady” will be coming out next month in the Coffin Blossoms anthology from Jolly Horror Press. This is one of my all-time favorite stories because it’s so silly–so if funny horror is your jam, keep your eyes out for it. I think it’s going to be a hilarious collection! 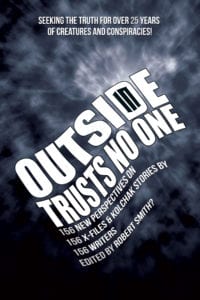