It’s February, which means it’s birthday month for me–I’ll be turning 49 in about three weeks, and menopause has been on my mind. And so one day I got to thinking about all the awesome horror fiction–body horror, psychological, grimdark, environmental, etc–that could be told about menopause. Weird? Nah. I mean, look–who doesn’t love the book and the film Carrie by Stephen King? It centers menstruation and puberty. Or the movie Teeth–which centers losing one’s virginity. Those are far from the only films that revolve around young women’s biology (and sexuality, I might add). Think Ginger Snaps, IT, the entire slasher film oeuvre that kills off all but the virginal young girl. Academia has been all over how menstruation is used as a symbol of the monstrous and of the dangers of women’s sexuality. You hardly see any representation of menopause, though, unless it’s some Lifetime film with a side character who is a wrinkled dowager feeling as though she’s less than a woman for not bleeding anymore–damned if you bleed, invisible when you don’t. It kind of goes without saying that if you’re not seeing cis gender women going through menopause in horror, you’re certainly not seeing any representation of trans folks, people of who are disabled, etc. 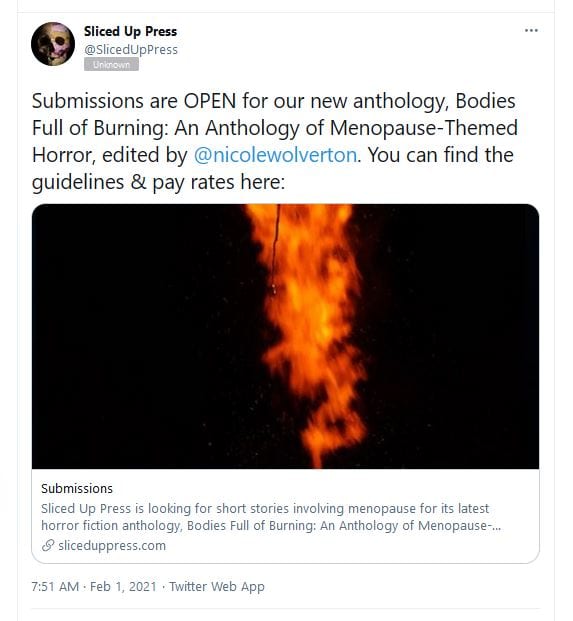 And that’s how I started thinking obsessively about short fiction starring people approaching or going through menopause…to the point that one day I tweeted about how much I wanted to see a publisher put out an anthology of menopause-themed horror. And lo and behold, I’m getting my wish–Sliced Up Press even asked if I might consider editing the project. Uh, hell YES!

The call for submissions was released today in honor of Women in Horror Month, and the planned release date of the anthology is September 2021–just in time for Menopause Awareness Month. You can find the full call here, but the gist: Menopause can be hell – so show us your demons, your darkest dreams, bloodiest crimes or scariest transformations. It’s called the change of life, but transitions can be deadly. The reading period starts now and ends June 30, so please start thinking up some good, horror-ific plots and get writing! I’m super excited for this project, and I’ll be even more excited when short story submissions start rolling in. Carrie White may have been scary, but someone going through menopause has likely had DECADES of internalized sexism and misogyny to work out. Be afraid. Be very afraid.

Sliced Up Press, by the way, is the brain-child behind Slashertorte, the cake-themed horror anthology that contains one of my short stories. 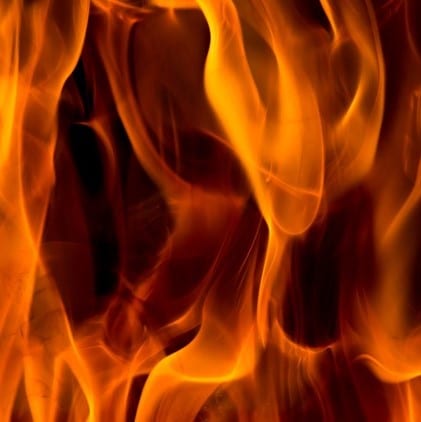